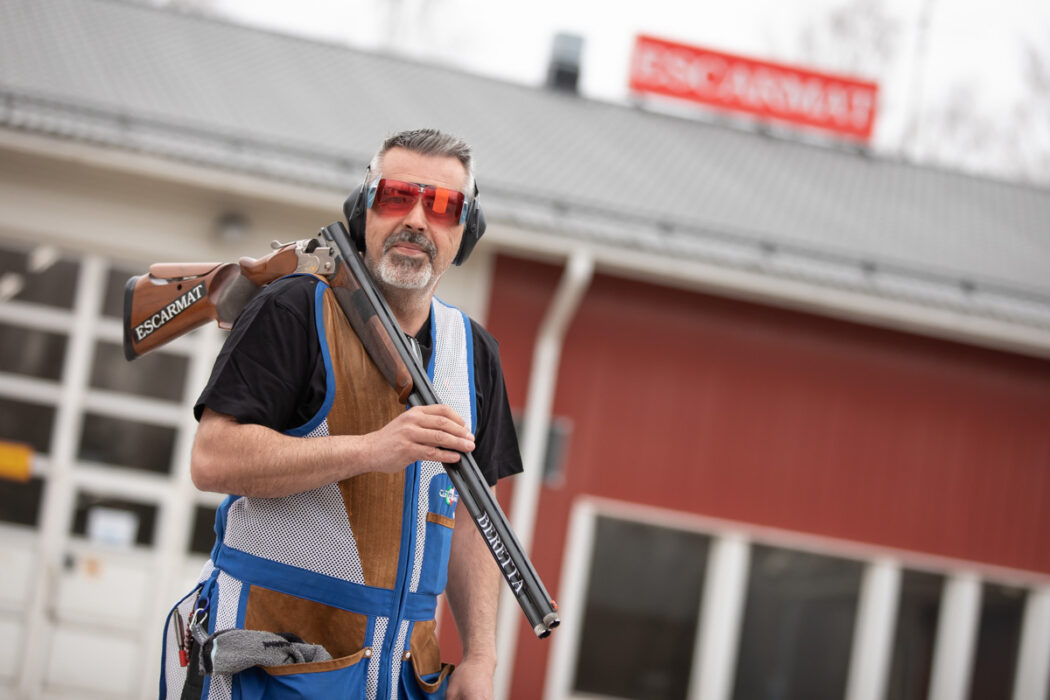 Ari Risku in his trap-shooting equipment. Before the coronavirus pandemic, he would practice as far as on the Canary Islands.
18.05.2021 |
Personnel

Ari Risku, who is actively involved in Trap shooting in his free time, has had a much longer career at Escarmat than he originally imagined. The job was originally supposed to last only a few weeks.

– I knew Veikko Junttila from a dart team and once asked him if there would be work at Escarmat. At the time there was not, but Veikko called me later and told me there might be work available for a few weeks, and I am still on that same road.

In the beginning, Risku worked as an Electrical Assembler in cabinet manufacturing, but since 2014 he has worked as the Supervisor for large cabinets.

The current duties of the Supervisor include, e.g., planning cabinet manufacturing work, distributing it to assemblers, and sending finished products to customers. Sometimes he is also in contact with the customers.

Trap shooting at his leisure time

At his leisure time, Risku can be found a few times a week at the trap range of the Ylistaro hunting club. Trap is a type of clay disc shooting in which discs flying away from the shooter are shot. In addition to practising, he also attends several national trap-shooting competitions each year.

– Personal success has not been experienced lately, but the year before last we got bronze as a team. The level in my series is really high in Finland at the moment.

In addition to a shotgun, equipment in Trap-shooting includes hearing protection, vests and goggles. The hobby also consumes 2,000-4,000 pieces of ammunition per year, in the acquisition of which Escarmat has sponsored Risku for several years.

– Ammunition is a significant item of expenditure per year, thus a big thanks to Escarmat for sponsoring!