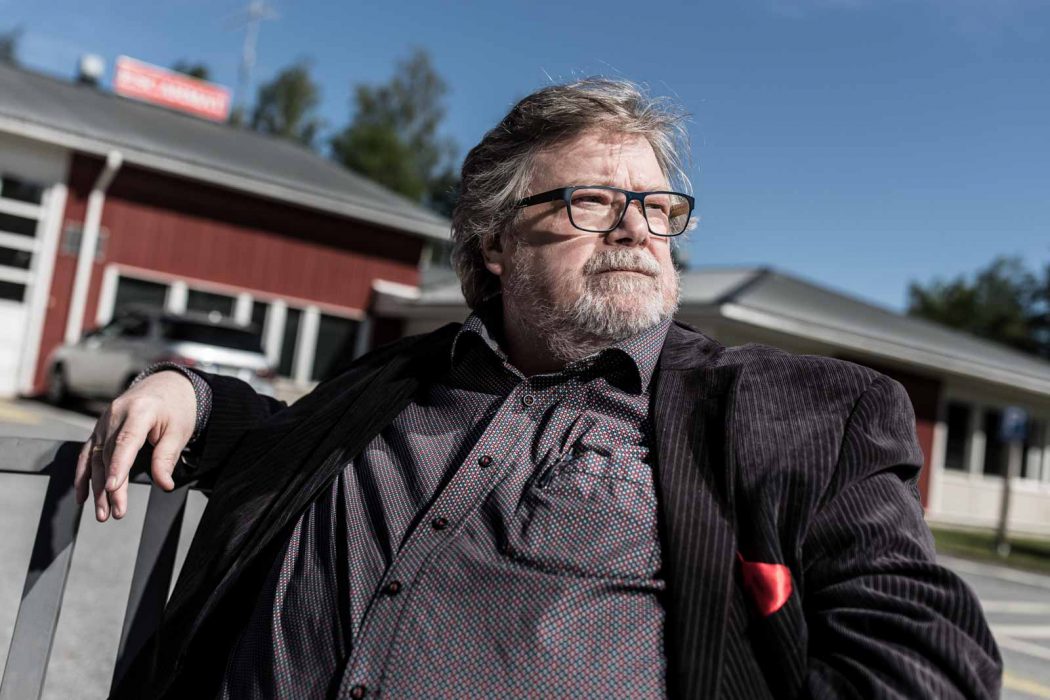 Veikko Junttila has been an entrepreneur for over 30 years. His business has survived two recessions and he has brought Escarmat to new growth.
17.08.2019 |
Personnel

Veikko Junttila, the founder and CEO of Oy Escarmat Ltd, commemorates how different turns of life led Escarmat to see the light of day. The quarter-century long history of the company holds everything you could imagine and maybe a little more!

Junttila, born in Sodankylä and brought up by his strict grandparents in Temmes, has little good to say about his childhood.

“Everything was forced to you with a whip, there is no point in commemorating such,” Junttila says.

The severe discipline present in his childhood made young Junttila not consider military service a meaningful alternative. The road eventually took him back home to Rovaniemi and the Lapland Central Hospital to pursue civilian service.

“At first I took copies and carried bodies, and by chance, I met the hospital electrician. As soon as the electrician heard that I had acquired an electrician training in the evening vocational school, he arranged for me to work in the hospital workshop,” Junttila commemorates.

Junttila was eventually offered a permanent maintenance man position at the hospital, but at the same time, he had the opportunity to study in Vaasa Polytechnic.

“I fought hard with myself whether to go to school or stay and work for the hospital. The hospital had many interesting mechanics that interested me. Therefore,” it was a difficult decision.

Graduated from Vaasa Polytechnic in 1983 as an electrical technician, Junttila ended up at Kemira as a supervisor of the electrical and instrument department.

“I remember thinking I was rather smart because I had attended school,” Junttila laughs.

However, working at Kemira quickly pulled him back to the ground.

“I was responsible for telecommunications, telephone communications, instrumentation, all factory automation and of course electrical work. The manager was not easy on me and that was a good thing.”

“I set up a business name and worked alongside my job at Kemira as an electrician all around Vaasa. I learned a lot and made important contacts. Eventually, I had so much work that I decided to leave Kemira. I changed my business name to Vaasan Sähköpalvelu Oy and asked for an acquaintance to be my business partner.”

It was 1991 and we were in the middle of the recession.

“I wanted to start the new business as quickly as possible because I already had customers.”

As the business of Vaasan Sähköpalvelu Oy grew, Junttila and his partner hit a professional disagreement as to what kind of customers their company should focus on.

Junttila had had a keen interest in industrial automation from an early age and he wanted to focus on serving industrial companies.

“Sending an electrician to a site required him to have a screwdriver, side cutters, rebar hank, knife and hammer in his pocket. Cabinet manufacturing requires a little more investment from the company, and that is what triggered our disagreement.”

Eventually, Junttila decided to set up a new company. At the same time, the industrial customers of Vaasan Sähköpalvelu Oy announced that they were ready to become customers of the new company founded by Veikko in order to secure a competent industrial automation partnership.

The origin of the name Escarmat, on the other hand, is difficult to describe in an anecdotal fashion, as Junttila decided to buy a pre-named and registered dormant company.

“I wanted to start the new business as quickly as possible because I already had customers. I went through different alternatives and Escarmat sounded like an apt name for a cabinet manufacturing company,” Junttila reveals.

In addition to the new company and its customers, Junttila needed skilled people as business partners in the company. Three employees of Vaasan Sähköpalvelu Oy joined Junttila.

“Yes, it took a bit of persuasion, but fortunately the boys dared to get involved. Kari even pledged his own house momentarily to get a loan from the bank. This enabled the commencement of the business,” Junttila commemorates.

With a loan of 160 000 Finnish marks, Escarmat bought the remaining cabinet manufacturing components of Vaasan Sähköpalvelu Oy and leased a production facility from the old Vaasa police car depot.

Escarmat began its operations in June of 1994.

“In an instant, eight million vanished from the turnover and a stock worth one million was left collecting dust on the shelf.”

It is windy at the top

Escarmat grew rapidly. Turnover for the first financial year was already around 300 000 Finnish marks and the one million waypoint was reached in a few years. At the same time, the credibility of the production facility leased in Vaasa was put to the test.

“Our auditor hinted that there was a production facility for sale in Helsingby. I offered exactly 1 million Finnish marks and secured the facility. By I know that my bid outperformed another bid by 5 000 Finnish marks.”

With the new facilities, Wärtsilä and ABB for example, were increasingly outsourcing their acquisitions to Escarmat. Wärtsilä still had own electric workshops in the 1990s, where own cabinets were assembled.

“Wärtsilä had been our customer before the “Escarmat era” began, and ABB began ordering more from us at the turn of the millennium. In fact, ABB became our customer by chance.”

Before joining Kemira, Junttila worked for a while at an electricity store called Merenkurkun Sähkötyö. The former supervisor of the electricity store had gone to work for ABB and asked Junttila for help with an urgent cabinet manufacturing project.

“Of course we will help, I said, and we completed the project successfully. That was the starting point of a gradually growing cooperation, Junttila recalls the early days of cooperation.”

The growth of Escarmat in the 21st century was tremendous. Turnover increased by an average of 1 million euros per year until the recession hit. At the same time, a large number of customers transferred part of their cabinet production abroad.

“We hit the wall with the pedal to the metal. In an instant, eight million vanished from the turnover and a stock worth one million was left collecting dust on the shelf. Keel splayed the bottom badly. We were at the verge of a bankruptcy,” Junttila commemorates with a serious face.

However, the situation was brought under control at the last minute and after a few years of balancing, new growth has now been realized.

However, the latest ordeal can only be found a few years back. A respected Escarmat employee and partner, Björn “Nalle ” Nordgård passed away in the fall of 2017 due to a serious illness.

“I remember when I hired Nalle to work for Vaasan Sähköpalvelu. We immediately got along well, even though we did not really understand each other. Nalle only spoke Swedish at the time and I spoke Finnish. Fortunately, these memories do not fade away.”

Junttila says he has come to realize the importance of his own health too late, and admits that he has pushed his limits during the fiercest years of growth perhaps too much. However, he has a healthy attitude towards the past.

“I guess I could have done something differently, but I cannot change the past by worrying over it. Today, however, things are fine and you really cannot tell what will happen tomorrow.”

What is the vision then for Escarmat towards the next quarter of a century?

“We will pick up the pace one gear at a time. We will serve our existing customers even better while acquiring a few more. We are only 25 years old!”